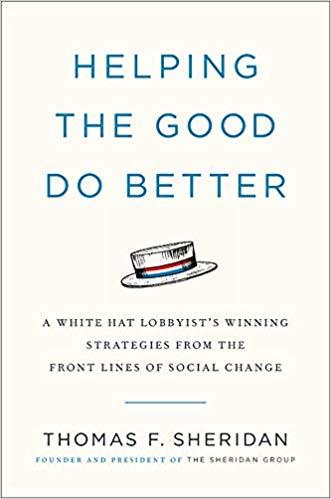 Business values stable conditions, but today’s economic, social and environmental conditions are neither stable nor sustainable. How do you make progress on a large scale when enormously powerful decision-makers block the way? That’s an urgent question. Fueled by vested interests, reactionaries have pushed America’s traditional political center so far to the right that “compromise” is now scorned, even by many on the well-intentioned left.  So why is Tom Sheridan optimistic?  This social worker-turned-professional lobbyist has spent three decades making the impossible happen in part by finding and leveraging common values with people whose views are almost entirely at odds with his own. In his new book, Helping the Good Do Better, Sheridan reveals how much incremental struggle it takes to make life-changing policy advances, and how we can stay motivated and empowered despite setbacks. He makes it an adventure rather than a chore with the help of bereaved parents, nervous politicians, hard-to-harness activist groups and celebrities including Bono, Elizabeth Taylor and Elton John.

“I was a social worker who got started advocating for a group home for the developmentally disabled,” Sheridan recalls. “You want to see fierce politics? Attend a local zoning board meeting! My mom had to start shopping out of town to avoid the hostility. Our programs were spared but the threat remained looming. I saw one thing that had helped us when Reagan cut programs for the disabled was the number of family members up in arms in front of the media. Disastrous cuts to programs for the mentally ill went through because they didn’t have the same support. And we’re still dealing with the fall-out today.

“I saw what was happening to real people and their communities because of bad public policies,” Sheridan recalls. “Lobbying has helped the opposition gain almost unimaginable power, so running good programs and services and hoping the funding lasts is not enough. Today, professional policy advocacy – otherwise known as lobbying — is not a luxury; it’s a necessity. We need to create effective strategies for socially responsible policy initiatives – and then use pragmatic politics to turn idealism into transformative public policies. The legislative process is an enormous gift when you are seeking transformational change.”

Sheridan started his career in social work but by age 25 was drawn to managing the broad-based coalition of AIDS-related advocacy groups. “I was in Indiana in 1984 when the Ryan White story broke,” Sheridan says. “This 13-year-old hemophiliac got AIDS from a contaminated blood treatment, and parents and teachers organized and rallied to prevent him from attending school.” It took six long years of tenacious work before the Ryan White CARE Act was finally passed, and the cast of characters and story of this success makes fascinating reading. In the interim, Sheridan was named deputy director of the Child Welfare League of America (CWLA) and honed his skills in passing the Abandoned Infants Assistance Act of 1988, which created a special foster care program for AIDS-infected children whose parents had died of the disease. “We went on from there,” Sheridan says.

“When I hit 30, I knew I wanted to broaden my efforts beyond single-issue politics. I founded The Sheridan Group to leverage and share what I’d learned in fostering coalitions and advocating for policies that, in some cases, represented transformational change. By the time I was 35, The Sheridan Group had six employees, and we’ve continued to grow throughout our quarter century in business.

“I still thought of myself as a social service advocate, not a business owner, which amused my savvy friends and clients. But the passion of a calling seems to figure in most successful, ongoing companies. Where you drive is the product development and delivery process, your vehicle is the P&L business operation, and a passionate vision is your fuel.”

The book is filled with battle plans on issues from developing nations’ debt to early childhood education. The takeaways for sustainable business legislation are clear.

Whatever the goal, “you need a solid sense of what you want to accomplish – you have to believe a principle and know how to relate it to your policy,” Sheridan asserts. “When you need the concurrence of impossible people to make an important, positive thing happen, you need to use practical politics that are firmly grounded in your principles. For example, arch-conservative legislator Orrin Hatch would not address HIV prevention but would address care for patients when we focused on the plight of Ryan White. Jesse Helms was able to connect our efforts with his Christian duty to care for the sick in Africa, a decade after his rapid opposition domestically in the early 90’s. .

“I don’t know if Jesse Helms found grace, but I picked up 10 more Republican co-sponsors the day after he agreed and we saved many, many more lives.

“Because our legislation is grounded in our principles, we can search hard for common values even with people we’d never think of as allies, and leverage those common values to achieve specific good results. Legislation is a long, complicated process with at least six opportunities at the subcommittee, committee and full House and Senate levels where you can get sidelined before anything reaches the president’s desk. You have to be prepared for what is required in legislative action. On the AIDS issue, we began with care, then research, and then prevention; not because we didn’t want to achieve all three at once but because we knew if we won on care – the least-resisted front – we would be paving the way for other wins to come.

“Compromise does not mean capitulation. We never take the view that the end justifies the means if those means violate our principles. That’s no way to make long-term, sustainable transformation happen. You need a strong, devoted fealty to principle – it takes a lot of energy to be results-focused but never sell out.

“At the same time that we were dealing with the ideological rejection of AIDS-related funding by Jesse Helms and his cohorts, we were dealing with demonstrations by ACT UP, whose members were angry we didn’t make prevention and medical research more of our focus. It was hard to stay calm when members of ACT UP came in and handcuffed us to the conference table, but I keep in mind that activists like these are doing their job – keeping advocates like me accountable and pushing for ever-better results.

“I’ve learned that our most transformational policy changes often come right after the most discouraging times – if you can just hang in there.

You can’t win ‘em all – in fact, you will lose more than you win – so knowing how to lose is really important. If you know you’re probably going to lose a battle, position things so that someone else can come back later and win the war.  For example, in our work to defend the right of gay Americans to serve in our military, we came up against the argument that this could not be a civil rights issue because the military is exempt from some civil rights laws to protect military unit cohesion.  We could not win on the principle of civil rights because of this exemption, but we set the stage so that, 17 years later, we could win by debunking the basis of the exemption: the fear that gays would be sexually attacking fellow soldiers in the showers and the like, thereby disrupting unit cohesion. We stated that this argument was false, and we filled the record with testimony by actual service members who explained that this is not how soldiers behave in real life. We corrected the record, showing that the exemption was based on fear, not facts – and unsubstantiated fears don’t beat civil rights. You need to question standing beliefs and document factual incidents so the record is true and decisions can be made on a rational basis.”

“Successful campaigns and movements combine grassroots passion with a lobbyist’s strategic  approach to policy, politics and press,” Sheridan says. Such strategies to pass fair, sustainable policies will be increasingly useful as more people understand their value. Says Sheridan, “between 2020 and 2060, Millennials will be 60 percent of the voters and 60 percent of the market. Government and business can’t afford to ignore or defy them!

“Social problems are bad for business, but to solve them, people can come at them from different angles and arrive at the same place.  ASBC members deserve credit for making the connection between social problems and their impact on business. Now they have the responsibility to lead on implementing solutions. Politicians listen to business leaders, and if ASBC helps redefine what policies are genuinely ‘good for business,’ everyone will benefit.”