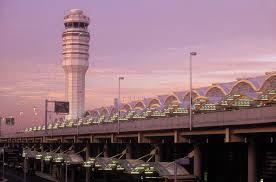 Washington, D.C. is serviced by several airports. The closest and easiest one is Ronald Reagan National Airport, which Frontier, United, Southwest and several other airlines fly in and out of Reagan.
You can take the Metro from the Airport to K&L Gates LLP or your hotel. Note, you will need change trains at Metro Center to the Red Line, heading North to UDC. (You need to purchase a Metro card before entering the train. Prices are based on the distance being travelled).

You can also fly into Baltimore Washington International, and take Amtrak or the MARC train. Both end up at Union Station.

The third choice is to fly into Dulles International Airport and take a taxi or shuttle to the District of Columbia.