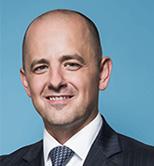 Evan McMullin is a co-founder of Stand Up Republic, an organization promoting democratic ideals, norms, and institutions in America. An independent candidate for President in the 2016 election, McMullin had previously served as chief policy director for the House Republican Conference, where he led a team of advisors covering all domestic and foreign policy matters. He also served as a senior advisor to the House Foreign Affairs Committee, where he conducted oversight of U.S. foreign policy related to North Africa, the Middle East, South Asia and national security and advised members of Congress on those issues. Prior to his work in the House, McMullin was an investment banker with Goldman Sachs in San Francisco, working with companies in a range of industries on various strategic and capital raising projects. He began his career at the Central Intelligence Agency’s National Clandestine Service as an operations officer, managing traditional and counterterrorism operations in the Middle East, Africa, and Asia. He studied International Studies at Brigham Young University and earned an MBA from the Wharton School at the University of Pennsylvania.